I often open pavucontrol to adjust the volumes of different applications relative to each other. Sometimes music is too loud, sometimes Jitsi sessions are too silent. However, it is annoying to switch context ever so often just to open the mixer, change volume, close again. As I am always looking to challenge myself with some useful projects reaching beyond just writing software, this felt like a great opportunity: I built myself a small mixing desk to control PulseAudio streams with hardware faders.

Pavu Mixer is what this resulted in. The project is fully free and open-source, including the hardware. It can all be found on GitHub: https://github.com/rahix/pavu-mixer 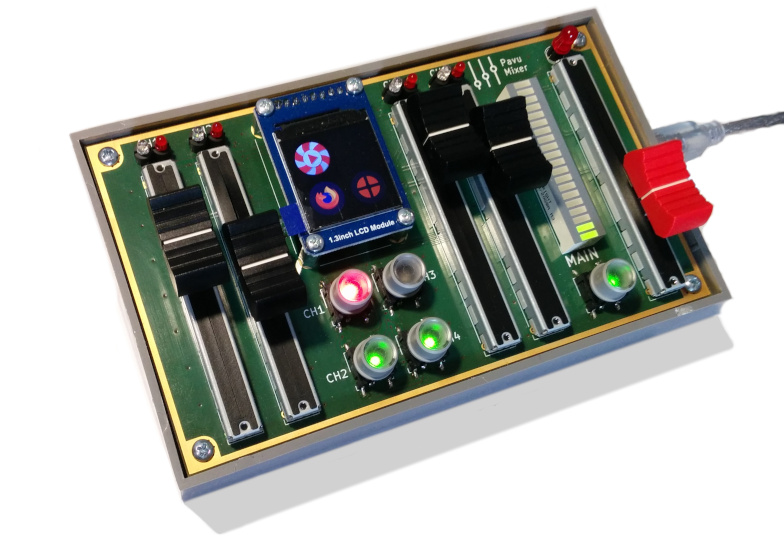 In this blog entry, I'm going to detail parts of the journey and the architecture of the project.

The design is as simple as I could make it: There is a single PCB which houses all the "UI" (= faders, buttons, display, LEDs) on the front and some I2C port expanders and shift registers on the back. To remedy the need of creating a custom front-plate for the enclosure, I chose to also make the PCB take that role: It might look a bit odd, but it makes the mechanical design 100 times easier.

A single 32-pin header is used for connecting the board to a "brain" - in this case an STM32F3DISCOVERY. I chose this board as I already had some around, because it already comes with the MCU's USB device peripheral all wired up, and lastly because I know it has good Rust support already.

There isn't much to say here - the hardware is extremely simple and nothing notable went wrong. Except for one major annoyance: I thought it would be a great idea to invent a custom pinout for the pin-header. That's quite alright if you're also designing the board on the other side of the connection, but as I am using an off-the-shelf devboard, I have no control over its pinout. This meant I had to build an adapter cable matching up pins on the Pavu Mixer side with pins of the discovery headers. I could have easily avoided this by just designing my board to plug right on top of the discovery, with my pinout matching theirs. Well, lesson learned for next time...

One thing I do briefly want to mention is how I created the 3D models of components which KiCad didn't yet know. I experimented with CadQuery for this, and I found the workflow to be extremely pleasant. CadQuery is a Python library which allows you to build up 3D models purely from code. As someone with mostly software background, this felt super natural and iterating on the models is quick and easy.

The sources to all my models can be found in the Hardware/3D/src/ subdirectory of the git repository and are MIT licensed.

I decided to try my hands on rolling a custom USB class for communication. On one hand this gave me an opportunity to explore the state of USB in Rust, and on the other I got to dig into some lower level USB layers I am not usually looking at.

I have to say, with the rusb crate on the host-side and the usb-device on the device-side, it was smooth sailing. The only part which I am missing is some form of asynchronous transfers in rusb. But I do see why they're still missing, and I think if I really needed them, either a workaround using threads or directly calling into libusb would have worked well enough.

Here's a list of things I took away from this:

The actual data sent over the wires in my custom USB class is serialized using the postcard crate. This is something where Rust is really amazing: I created a small common crate which is shared between firmware and host-application which defines the data types for communication. postcard then transparently handles serialization, and because the messages are encoded as enums, the compiler verifies that I actually handle all possible messages correctly.

Async/Await is amazing for firmware!

I didn't want to go with a full-blown RTOS because the functionality of the board is so simple. However, as it grew, I wanted to split it into different modules which each take care of one single thing. I found that using async/await with James Munns' cassette is a perfect way to split my firmware's clunky big main loop into many independent loops running "in parallel". Of course they are still running in series, but interleaved with each other and I can write them as if they were independent. In essence, it looks like this:

This pattern made it super easy to write clean separated loops for each of the different components the firmware has to take care of. For "communicating" between them, I used Cells and RefCells containing data structures from the heapless crate.

As an example, the faders task will check if a fader changed position since the last iteration. If it did, it will store the new value in a LinearMap by the index of the channel. The USB task then iterates over all entries of the LinearMap, trying to send them to the host and removing an entry if successful.

The use of async also allowed my to easily wrap some polling operations into an async fn() to keep the loop code simpler. Check send_device_message_async() for an example of that.

Importantly: Yes, I still query the I2C bus blockingly, and yes the SPI writes for the display are also blocking. But you can still benefit from async greatly, even without going all the way and making everything non-blocking! Putting it differently: It is a nice way to implement cooperative multi-tasking, provided by the compiler essentially for free.

The pain of PulseAudio interaction

A different story was the "async" interface of PulseAudio in the host-side daemon. PulseAudio uses a callback based API which does not lend itself well for Rust. I had quite a bit of trouble getting this to work the way I wanted. I ended up writing a wrapper layer which hides all the callback-code and just provides the "user" with a stream of Events. Those are sent from the callbacks into a standard std::sync::mpsc::channel().

Another pain point was the fact that the libpulse-binding crate is implicitly unsafe (which seems to be intentional, see libpulse-binding#27 and libpulse-binding#30). This means that you can trigger undefined behavior and memory bugs from entirely safe downstream code. I was quite busy trying to understand which invariants I need to uphold for my code to not constantly crash. In the beginning, it would always segfault on panic because I had forgotten to destruct the PulseAudio context properly. The following piece of code proved to be invaluable:

Without it, I couldn't even see panic messages from Rust because the segfault always happened just before those messages and backtraces could be shown.

The LCD currently just displays the application icon for the PulseAudio stream attached to it. This is implemented in host-daemon/src/icon.rs using the Rust GTK bindings. It even takes your selected icon theme into consideration!

The only problem here is that PulseAudio "sink-inputs" often do not provide accurate icon information. Lots of applications embed Chromium which means I would display the Chromium icon for those streams. To work around this, I added an icon overriding mechanism to the config where you can select alternate icons depending on other properties reported by PulseAudio. As an example:

So far, I've been using my little mixer with great success. Using Rust on both sides definitively helped with software stability a lot. I'm looking forward to more "full stack Rust" projects in the future :)